Water resource recovery facilities (WRRF) are increasingly required to remove nutrients from wastewater, and nitrogen and phosphorus are the nutrients being targeted. Both are necessary components of living creatures' mechanism. Algae absorb nutrients that are dissolved in the water. Algal development and mortality are accelerated in nutrient-rich waters, resulting in hypoxia, a low oxygen environment unfavourable for fish and other higher life forms. Nitrogen is a major problem in brackish waterways including the Chesapeake Bay, Long Island Sound, and Puget Sound. The result is substantial investment in improving the nitrogen removal capability of WRRFs that discharge to these watersheds.

Utilities are encouraged to remove as much nitrogen as possible in order to meet mass loading limitations or to gain credits that may be sold to other utilities. Excess nitrogen in ground water is a source of concern for toxicity in drinking water. In situations where treated water is land-applied, Total inorganic nitrogen (TIN) is restricted to not more than 10 mg/L to protect against a serious condition called methemoglobinemia, which limits the ability of blood to carry oxygen. Infants and children are particularly susceptible to this potentially life-threatening condition.

Biological denitrification is the most prevalent method for removing nitrogen from spent water. Nitrification to produce nitrate, anoxic (low DO) conditions, and a carbon supply are all required for biological denitrification. By putting an unaerated zone (anoxic zone) at the upstream end of an activated sludge tank and internally recycling nitrified mixed liquor from the downstream aerated (oxic) zone, all three conditions can be accomplished. This is based on the modified Ludzack-Ettinger (MLE) configuration of the activated sludge process, as shown in Image 1.

To make utilization of the carbon (COD) in the untreated water, the anoxic zone is put upstream. An extra carbon source may be necessary if the water does not contain enough COD or if very low effluent nitrogen is desired. Internal mixed liquor recirculation (IMLR) and external carbon dosage are both controlled by nitrate, which is a crucial process parameter. Monitoring nitrate at the anoxic and oxic ends of the zones gives the information needed to perform the required nitrogen removal at the lowest possible cost. One client employed online nitrate monitoring to optimize an MLE process, as seen in the case study assessment below.

A new discharge requirement for an industrial plant was to remove nitrogen from wastewater prior to land application. The current activated sludge treatment system was converted to an MLE setup as the first phase. An existing flow equalization basin was converted into an anoxic tank, and a new pump was installed to recycle nitrate from an existing aerated basin to the anoxic tank. Industrial wastewaters, unlike municipal wastewater, are frequently unbalanced, meaning they include carbon and nitrogen in unfavourable ratios for biological treatment. In this example, the untreated water contained high nitrogen concentrations but low carbon amounts.  Therefore, a new chemical feed system was required to feed an external source of carbon (glycerin). Following modifications, 90 to 160 mg/L ammonia nitrogen in the untreated water was reduced to 15 to 25 mg/L Total Inorganic Nitrogen in the treated effluent. The removal rate improved greatly, but was still not in compliance with the 10 mg/L limit. The next step involved deploying YSI VARiON sensors in the anoxic tank and oxic tank for monitoring ammonium and nitrogen continuously to identify the factors limiting performance.

Online monitoring of the nitrate concentration at critical locations provides the information needed to achieve the three objectives for a denitrification control system:

Objective (1) is not satisfied for the daily monitoring data shown in Image 2.

The limit for oxic nitrate has been exceeded. The anoxic zone nitrate is likewise very low; thus objective (2) is not met. These criteria, taken together, suggest that denitrification is nitrate limited. Increased IMLR flow will return more nitrified mixed liquor to the anoxic zone, boosting denitrification and optimizing the usage of COD from the anoxic zone.  Objective (1) is also not satisfied on the day shown in Image 3. 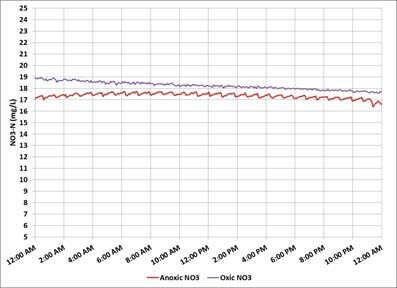 This particular circumstance happened over the weekend, when production and carbon feed were turned off while the IMLR continued to transport nitrate from the oxic to the anoxic zones.

The denitrifying bacteria, on the other hand, lacked the energy to convert the nitrate to nitrogen gas since there was no carbon available. Because there was no flow, the nitrate content did not rise over the oxic zone owing to waste nitrification, as it would in a municipal WRRF. To provide the carbon required for denitrification, the answer was to keep adding glycerine over the weekends.

Objectives (1) and (2) are both met in the situation depicted in Image 4. 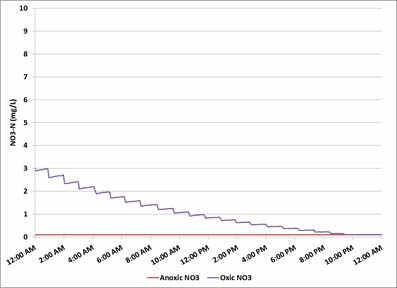 The anoxic nitrate concentration is nearly negligible, while the oxic nitrate concentration is well within limits. In a WRRF with extra COD, this would be a desirable scenario. However, in this instance, the COD comes from a third party and must be acquired at a high cost. When Objective (1) is met, the carbon dosing system should be turned off in order to achieve Objective (3).

The facility was able to immediately detect limiting issues thanks to online monitoring with the IQ SensorNet. Operators were also able to manually dial-in the best rates of IMLR and COD addition to fulfil treatment goals while lowering operational costs. It's also feasible to implement automated control methods based on data from online nitrate sensors.

A strategy proposed in the IWA publication Scientific and Technical Report No. 15, Instrumentation, “Control, and Automation in Wastewater Systems” comprises four feedback loops to achieve the three objectives stated above.

There are two types of online nitrate sensors that can be immersed. In the case study reported in this paper, ion selective electrode (ISE) sensors were employed. The combination of a nitrate ISE and an ammonium ISE on the same probe provides a flexible option for measuring nitrification as well. Calibration is required for ISE sensors, and electrodes must be replaced when they no longer offer enough accuracy. Alternatively, nitrate can be detected without the use of reagents using an in situ spectrometric (optical) sensor based on the assumption that it absorbs particular wavelengths of UV light directly.

Because the optics will endure for many years, spectrometric sensors have a higher purchase cost but a lower ownership cost. Furthermore, optics are more stable, allowing for factory calibration. Calibration by the user is optional and may not be required at regular intervals. COD, another important parameter for denitrification, may also be measured optically in situ and combined with nitrate measurement on the same probe.

Want to Find Out More?

If you would like to know more about Online Sensors and how to use them, contact a member of our team today!